Uganda Should Go For Concentrated Solar, Not Nuclear

Uganda Should Go For Concentrated Solar, Not Nuclear

Uganda aims to be a middle-income country by 2040. The government’s Uganda Vision 2040 policy has identified the requirement to increase installed power generation capacity in order to enable economic development. The policy intends to make nuclear energy the dominant generation technology in Uganda, posing a 24 GW nuclear energy target by 2040. This figure is noteworthy given that the current installed nuclear energy capacity on the entire African continent is 1.9 GW.

Rather than backing down after criticism surfaced around nuclear expansion in sub-Saharan Africa, President Yoweri Museveni recently announced a significant increase of the Vision 2040 target: the plan is now to install 30 GW of nuclear energy in Uganda by 2026. As part of official pre-feasibility studies, the International Atomic Energy Agency (IAEA) carried out onsite visits to uranium rich districts and potential sites in Uganda. The Ministry of Energy and Mineral Development lists nuclear energy as a policy priority in the next 5 years and reports that 33 different public sector institutions are already participating in Uganda’s nuclear energy programme.

Given its developmental targets, the Government of Uganda’s desire for nuclear energy is easily comprehensible given the following three requirements: First, Uganda aims to be self-reliant on electricity. Hydro potential in Uganda is capped at around 3.5 GW. The country is endowed with uranium resources, providing a potential additional source of domestic generation once all hydro potential has been exploited. Second, if the ambitious economic growth targets are to be realised, Uganda needs to add a generation technology to the mix that is able to generate 24-hour baseload electricity, which nuclear is capable of, unlike solar PV and wind without large-scale electric storage. Third, nuclear energy does not emit greenhouses gases like coal or natural gas-fired plants, which would jeopardize Uganda’s international commitments to curb emissions growth.

However, there is a more promising technology that is capable of meeting all three of these requirements, which currently does not feature prominently in Uganda’s energy sector discussions: concentrated solar power (CSP).

By using mirrors with tracking systems, CSP is capable of achieving temperatures sufficiently high enough to operate steam turbines, and, if designed accordingly, even a combined-cycle plant using solarised gas turbines. Solar Power Tower and Parabolic Trough designs exist where the sunlight is either concentrated onto a heat exchanger housed in a tower or onto a pipe running along the mirrors’ focal point, respectively. 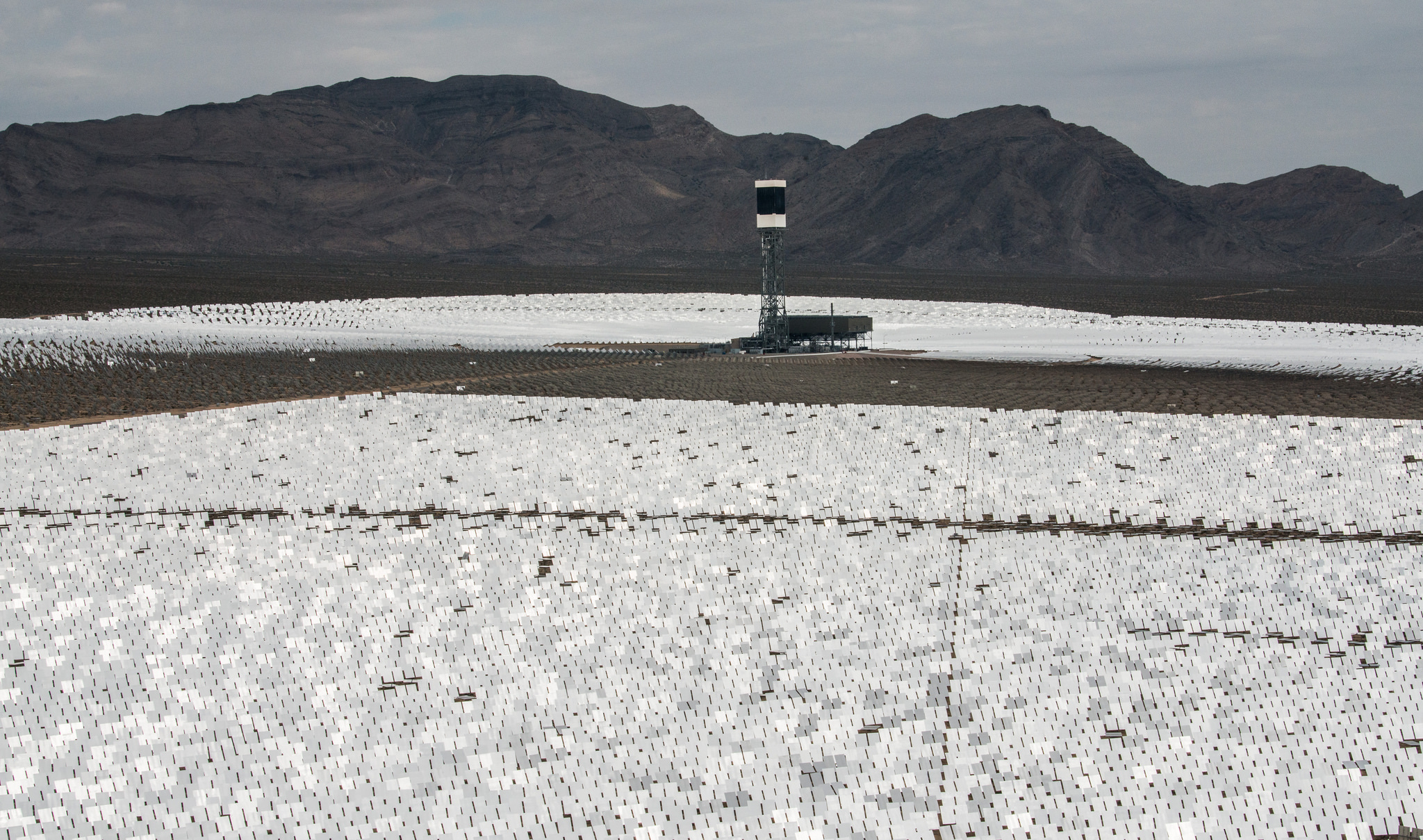 The available solar radiation in each of Uganda’s 112 districts alone is sufficient to power the entire country. CSP plants are capable of providing readily dispatchable, 24-hour baseload electricity if equipped with a large-enough thermal storage unit, usually filled with molten salt or synthetic oil.

The available solar radiation in each of Uganda’s 112 districts alone is sufficient to power the entire country.

And finally, they do not emit greenhouse gases, thereby not contributing to climate change. Hence, CSP is capable of meeting the three main requirements that drive Uganda’s interest in nuclear energy as described above. Crucially, however, CSP offers four additional benefits over nuclear energy. 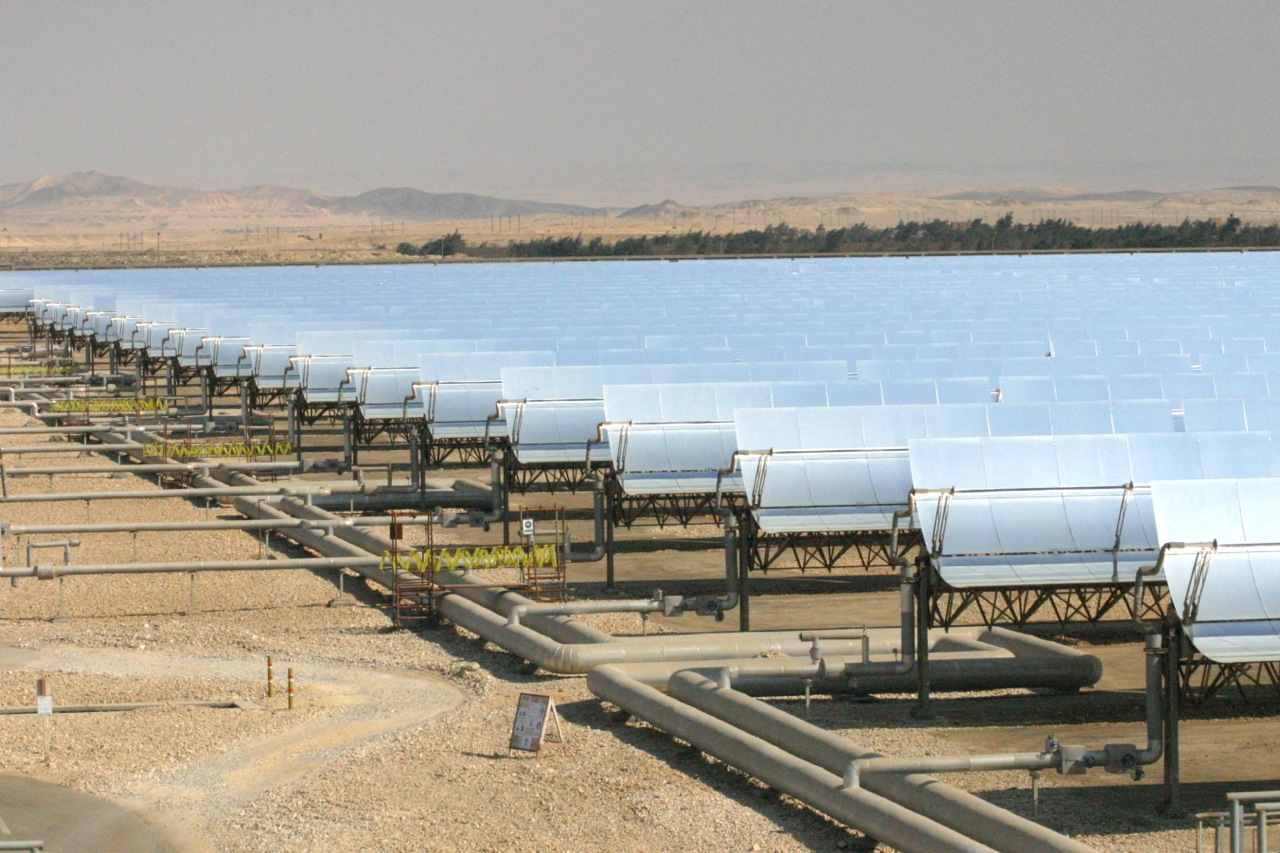 Uganda should consider shifting from nuclear to CSP due to (1) the cost competitiveness of CSP, (2) its environmental benefits and associated funding opportunities, (3) the higher flexibility of CSP plant size and location, and (4) its opportunity for local economic value addition and job creation.

Firstly, CSP has experienced an unprecedented cost decline in the last 2 – 3 years. Figure 2 illustrates this trend. In a 2017 auction in Chile, the winning bid for the 260 MW 24-hour baseload Copiapo CSP Project  was as low as 0.063 USD/kWh, which is lower than most figures provided for nuclear energy if external costs for possible accidents and insurances are included.

CSP has experienced an unprecedented cost decline in the last 2 – 3 years.

As the installed global capacity of CSP currently is several orders of magnitude lower than any other major generation technology, further cost decreases are highly likely given additional learning effects. 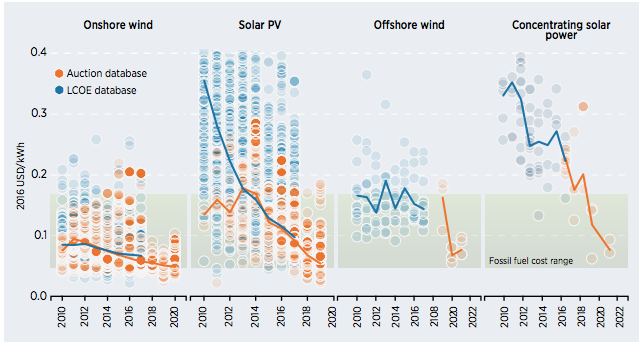 Second, despite being carbon neutral, nuclear energy poses other significant environmental risks. The danger of accidents in nuclear power plants in advanced economies such as the UK, Japan and the US is well documented. Even if accidents can be contained, nuclear waste has to be stored securely for at least 10,000 years. Indeed, globally, no suitable geologic formation for permanent radioactive waste storage has yet been discovered. By contrast, CSP is based on entirely renewable resources and does not require any rare raw materials such as PV cells and batteries. As both nuclear energy and CSP incur comparably high capital costs, the recent international trend to provide funds for large-scale renewable energy projects is likely to have positive finance implications for CSP.

Third, CSP is considerably more flexible in terms of plant size and location than nuclear energy. Solar insulation is high in most parts of Uganda. In addition, CSP is more flexible in terms of their size than nuclear plants. Consequentially, CSP plants can be built in most locations in Uganda close to local demand centres, limiting transmission losses and the need for long transmission lines in a country where the evacuation of power has become a growing concern.

There is a real opportunity for Uganda to establish itself as a leader in a modern and sustainable type of generation technology.

Fourth, in contrast to nuclear energy, significant parts of CSP plants have the potential to be manufactured locally, namely the mirrors and solar tracking technologies. As CSP is projected to grow rapidly in the coming decades, there is a real opportunity for Uganda to establish itself as a leader in a modern and sustainable type of generation technology.

In summary, several reasons exist why the Government of Uganda may want to reconsider its nuclear endeavour and view its solar insulation as a valuable resource for baseload generation.

Philipp Trotter is a Research Associate in Renewable Energy at the University of Oxford, UK. His research focuses on local business development of energy SMEs in Uganda and Zambia. He has several years of experience working in the energy sector, working with large-scale utilities as a consultant for McKinsey & Company. He studied for a PhD in Mechanical Engineering at the University of Bath on energy planning optimisation in sub-Saharan Africa and holds a Mechanical Engineering and Business Administration Diplom from RWTH Aachen University (Distinction). He furthermore holds an MSc in Politics of the Developing World from the London School of Economics and Political Science (Distinction). His academic publications have been featured in leading international energy and mathematical optimisation journals.