Over the past several months, CDA has been supporting a team of researchers from the University of Oxford and University of Cape Town to conduct the RISE: Renewable, Innovative and Scalable Electrification project. RISE explores new models of energy provision in rural Uganda and Zambia. Three principal areas of investigation guide the study: (1) How can innovative business models sustainably and profitably electrify rural areas while helping drive local economic development, (2) What institutional frameworks are required to support the growth of such innovations and (3) How can these businesses effectively engage with local communities to develop electrification projects relevant to them.

To gain an in-depth understanding of the Sub-Saharan Africa (SSA) off-grid energy ecosystem, the RISE team conducted interviews with over 35 off-grid energy providers in Uganda, Zambia, Nigeria, Tanzania and Ghana, and another 45 interviews with public sector representatives. A survey on the need and use for electricity was also administered in rural households in Uganda and Zambia. The project’s findings are distilled in this Insights post. 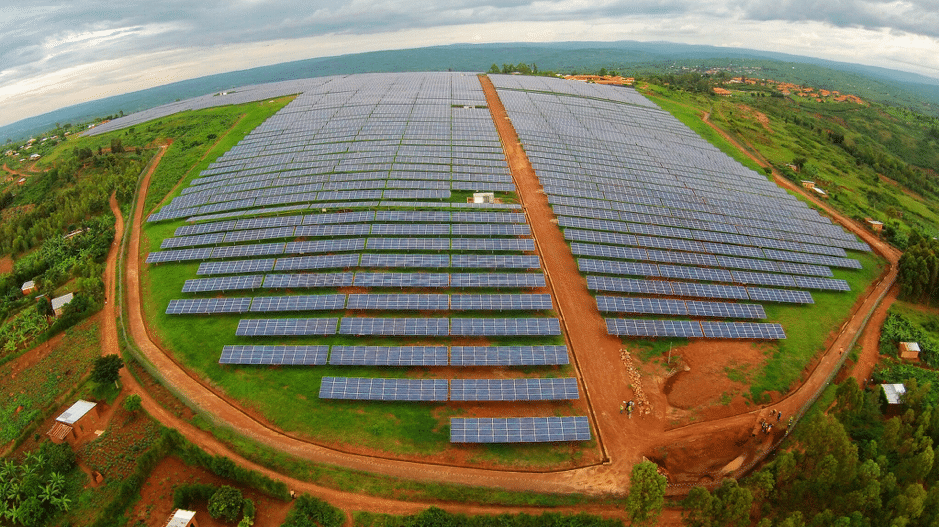 Access to reliable, affordable electricity in SSA is lacking. This, along with the constraint it poses on the successful industrial development of the region, is well-documented. Rural areas are particularly affected: the rural electrification rate in SSA was just 22.6% in 2017, while in Uganda and Zambia it was less than 11% and 10% respectively. What is more, the number of unelectrified people in both countries has actually been growing since 1991, at an average rate of 1,600 additional unelectrified people per day in Uganda and 300 in Zambia.

Electrifying rural populations at a price they can afford, while being financially sustainable without having to rely on subsidies, poses a great challenge to energy developers. There are several reasons for this. The low and seasonal income of many rural consumers makes them unable to pay high enough tariffs to cover the energy providers’ operating costs. Local financial institutions often perceive off-grid energy developers as risky, so affordable local-currency finance for off-grid electrification is in short supply. This stunts developers’ growth and their ability to capture economies of scale. At the same time, government efforts have until recently focused on expanding grid access, so public sector support for off-grid electrification has been limited.

Lastly, labour productivity (defined as GDP per person employed) in SSA remains low. SSA has the lowest labour productivity in the world, and its growth rate is at just half that of the global average. As shown in figure 1 below, labour productivity in SSA has grown by just 40% since 1991, compared to a growth of 80% globally. Low labour productivity translates into low household incomes. This is especially true in rural areas: in the case of Uganda, close to 90% of the country’s poor live in rural areas. For these populations to lift themselves out of poverty, a process of structural transformation must take place. Structural transformation refers to the shift of labour from employment in low-wage, low-productivity activities (usually agriculture) to high-wage, high-productivity activities (manufacturing and services). Such a transition can be spurred by the growth of a manufacturing sector, which helps develop local value chains through which raw materials can be processed. Processing adds value to these goods, increasing the revenue generated from their sale and ultimately raising household incomes. 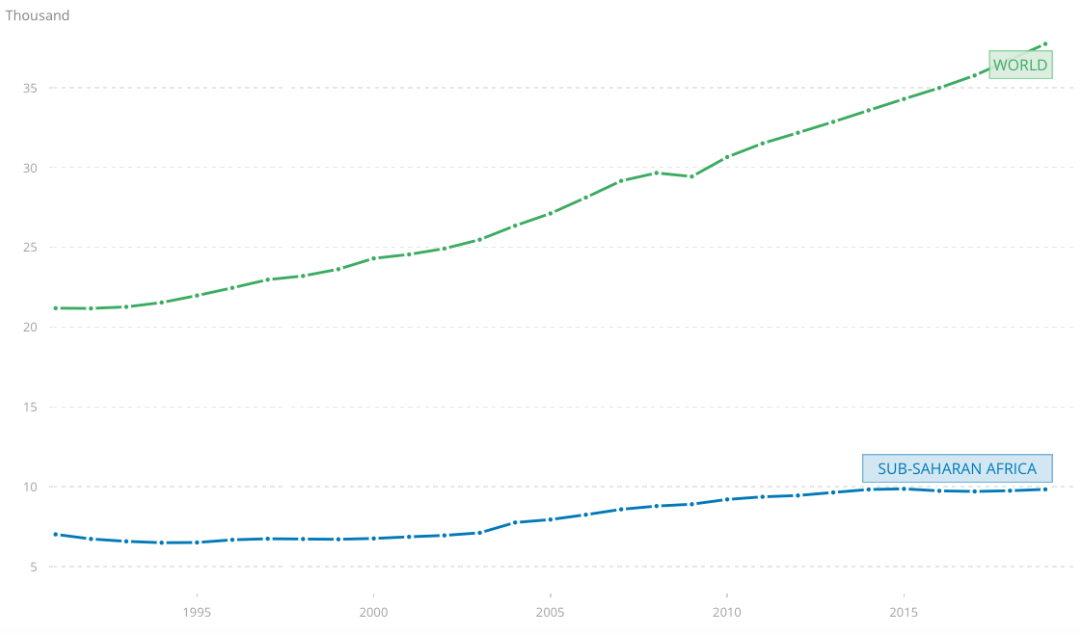 Emerging innovative business models, so-called Integrative Developers (IDs) are attempting to address the above challenges. IDs are mini-grid developers whose innovation lies in diversifying their product offerings and revenue streams to profitably supply energy to rural households. The business model operates as follows: IDs produce electricity using solar, biomass or micro-hydro plants, selling part of the energy they produce directly to rural households, while using the rest to power productive services (e.g. refrigerators, ice production, water pumps for irrigation, and mills for grain milling) which they sell to local entrepreneurs. IDs thus use some of the revenue generated from the sale of services to “cross-subsidise” the tariffs charged to rural households. In this way, energy providers can profitably supply rural households at a price they can afford.

Crucially, ID models also answer the question: energy for what? Rural electrification on its own will not drive structural transformation. As important as electricity is for cooking, phone charging and lighting, it will not have a truly transformative effect on rural economies unless it is put to productive use. The benefit of energy-powered goods and services is their ability to add value to raw materials. The resulting development of local value chains drives economic development in two mutually reinforcing ways: adding value to raw materials raises revenues from their sale, and local firms increase their demand for labour, creating new job opportunities for the community. Rural household incomes rise as a result, enabling them to pay higher tariffs to energy providers and increase investment in electricity-powered production. 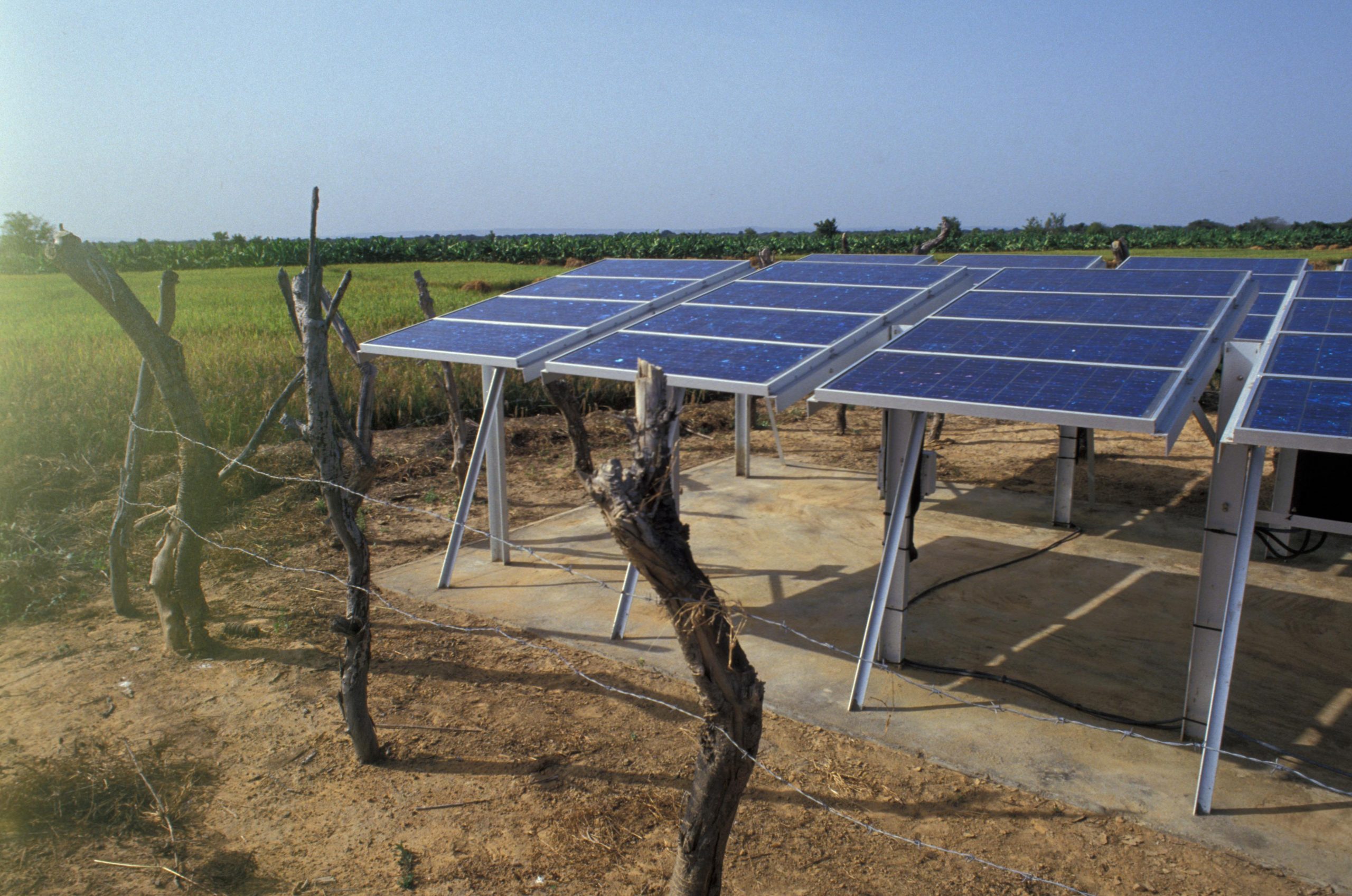 For IDs to successfully develop and scale, the whole business and regulatory ecosystem within which they operate must come together to create an enabling environment.

First, the government formulates the system of rules, regulations and incentives in which innovative off-grid companies operate. The governments of Uganda and Zambia are currently reforming their off-grid regulatory frameworks to encourage investment in rural areas. However, a number of challenges persist, hindering the deployment of the off-grid solutions needed to help transform rural communities.

Both the governments of Uganda and Zambia currently view electrification as an end in itself, rather than as a means to the ultimate end of structural transformation. As a result, a strategy to integrate electrification in the broader context of industrial development is lacking. The public sector should maintain a clear focus on making off-grid electrification for productive use a priority, and adjust its strategy, rules and regulations accordingly. The formulation of measurable targets focusing not just on raw electrification but on related development outcomes as well (e.g. community-level growth of electricity demand, jobs and household income) would help guide such policy.

A more explicit policy to encourage innovation should be the cornerstone of off-grid regulatory reform. The private sector currently underinvests in research and development (R&D) due to insufficient R&D capacity support and lack of risk-sharing options. Targeted public support for domestic R&D would help create a more conducive environment for innovation. Tax exemptions, business capacity development and the promotion of local-currency financing to off-grid firms are just a few instruments that can be leveraged to this end.

Further, the current regulatory environment is seen as a burden by many off-grid developers. In Uganda, simply obtaining an institutional license takes between six months to a year, not to speak of additional requirements to perform costly feasibility studies, or the prohibitive import duties levied on mini-grid components. Government rules and regulations should be reformed to better reflect the aim of promoting off-grid electrification.

Government funding to off-grid developers should also be considered a crucial step to help IDs scale beyond pilot stage. Where local financial markets are not sufficiently developed to lend to innovative businesses at affordable rates, local development banks could usefully step in to provide the capital necessary for them to scale. Rwanda’s low-interest loan scheme for mini-grid developers could provide some inspiration. 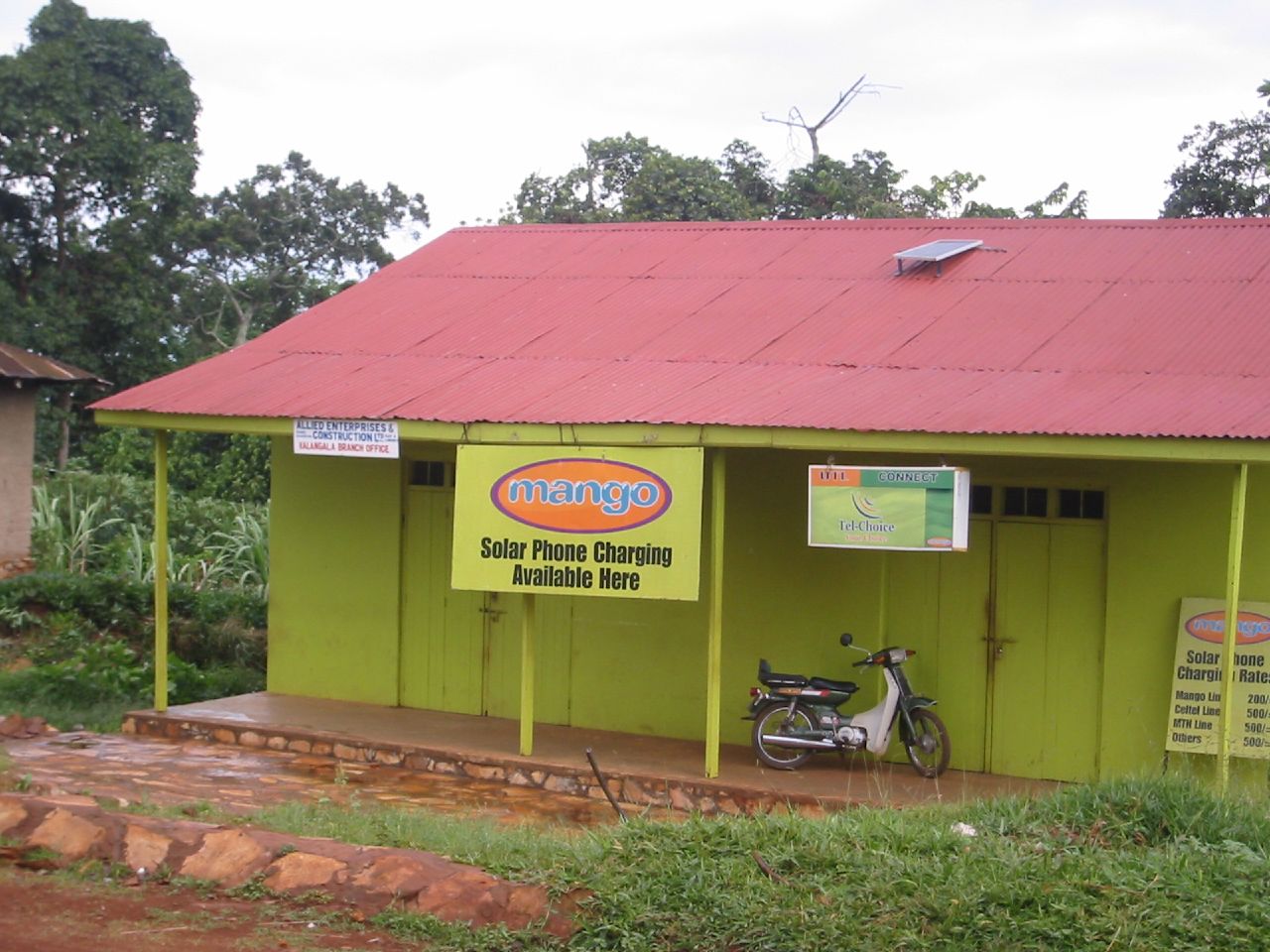 Second, it is important that IDs involve the local community in project planning, to ensure that relevant, needs-based solutions are developed. Consultation with local communities has until now not been the norm in the energy sector. In Zambia for example, Chiefs are often the overseers of local economic development efforts and are consulted on a range of policy areas. However, they have historically been left out of energy policy discussions, often up until the concrete project implementation stage. IDs should instead develop a system of ongoing consultation with community representatives, to ensure that the needs of the community are met.

Third, donors should align their activities with government policy priorities. This is especially the case where government preferences are clear, for example in site-selection and tendering processes for off-grid electrification. At present in Uganda, donors are competing to fund the Rural Electrification Agency’s (REA) service territory master plans. This would enable them to identify suitable project sites which they could tender to their preferred project developers, side-stepping the REA’s local competitive award criteria. Such practices can ultimately be detrimental to the local off-grid ecosystem. This may be the case if lucrative projects are given to foreign developers who are better placed to meet donor requirements, pushing local players out of the market. Instead of rivaling government policy, donors should align their plans to support stated government goals for the benefit of the local off-grid market.

Fourth, as shown in figure 2, an ecosystem of private sector firms supporting the successful scaling of IDs is emerging. Such firms include: small-scale IT providers which help develop digital platforms for IDs, data collecting firms that sell data allowing IDs to make more informed business decisions, microfinance institutions, local distributors, and more. This is an encouraging development, which will add dynamism to the market and enhance the effectiveness of ID deployment and growth. However, again, the growth of firms on the margins of the off-grid sector can only happen in the context of an enabling policy and regulatory space. 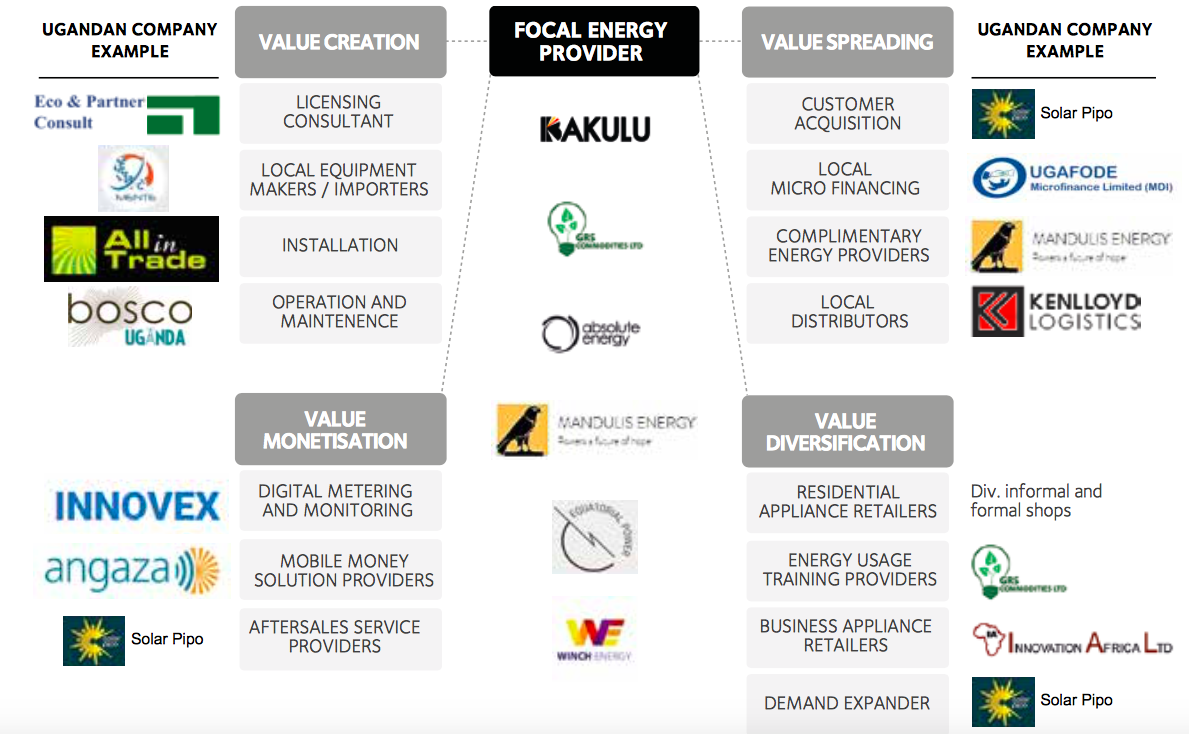 Budding innovative business models have the potential to profitably electrify rural areas, while helping their communities benefit from energy-enabled structural transformation. This is an encouraging development. However, in the face of such dynamic innovation, business as usual in the surrounding ecosystem is not an option. To help these innovative businesses develop and scale, a more hands-on approach by all supporting actors in the off-grid space is required.

This Insight post is based on the Practitioner Report for RISE: Renewable, Innovative and Scalable Electrification, which CDA co-authored with researchers from the University of Oxford and the University of Cape Town.

Ester Kovandova is a CDA Fellow, currently also studying towards her Masters degree in International Economic Policy at Sciences Po, Paris. Before joining CDA, Ester was part of the Programme Management team of UNCDF’s Mobile Money for the Poor Programme in Brussels. She interned as well at the German Marshall Fund of the United States as an economics research assistant, and at the European Parliament as an assistant to a MEP.